For hundreds of years, this Ottoman-era cologne has been synonymous with Turkish hospitality. Now, it’s being used to fight coronavirus.

As commercial hand sanitisers run dry in the US and Europe, people in Turkey are turning to a traditional, aromatic fragrance that has taken on a whole new relevance amid the coronavirus pandemic: kolonya.

Meaning “cologne”, kolonya has been a treasured symbol of Turkish hospitality and health since the Ottoman Empire, and it’s often described as Turkey’s national scent. Traditionally, this sweet-scented aroma made with fig blossoms, jasmine, rose or citrus ingredients is sprinkled on guests’ hands as they enter homes, hotels and hospitals; when they finish meals at restaurants; or as they gather for religious services. But unlike other natural scents, this ethanol-based concoction’s high alcohol content can kill more than 80% of germs and act as an effective hand disinfectant. 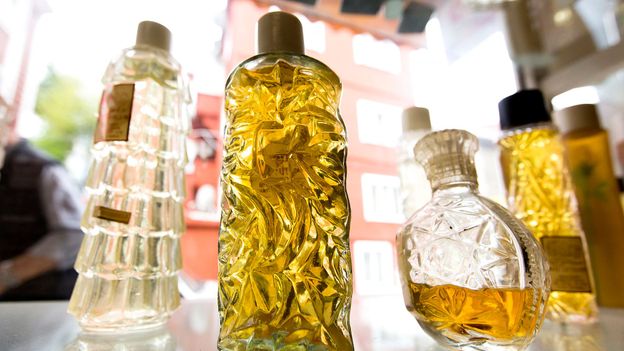 Sales of kolonya, Turkey's "national scent", have soared since the start of the coronavirus pandemic because it is also an antiseptic (Credit: tamayalper/Getty Images)

So, when Turkey’s Minister of Health championed kolonya’s capacity to fight the coronavirus on 11 March, it not only inspired a wave of national media attention touting the cologne’s anti-Covid-19 powers, but also caused queues stretching nearly 100m to quickly form at chemists and stores across Turkey. In fact, since Turkey’s first confirmed coronavirus case in mid-March, some of the nation’s main kolonya producers have said that their sales have increased by at least fivefold.

Since Turkey’s first confirmed coronavirus case in mid-March, kolonya sales have increased by at least fivefold

“Kolonya is effective at protecting against coronavirus because when it contains at least 60% alcohol, it breaks down the virus’ hard shell,” said Dr Hatira Topaklı, a family physician in Istanbul who explained that most kolonya products contain 80% alcohol. Topaklı also notes that commercial disinfectants aren’t as common in Turkey as they are in other countries. “[Kolonya is] additionally effective because it’s something that many people already have and is a part of their daily routines. They don’t need to learn a new way to protect themselves against this virus.”

To meet the fragrance’s surging demand, on 13 March the Turkish government stopped requiring ethanol in petrol in order to boost the production of kolonya and other household disinfectants, specifically to fight coronavirus. 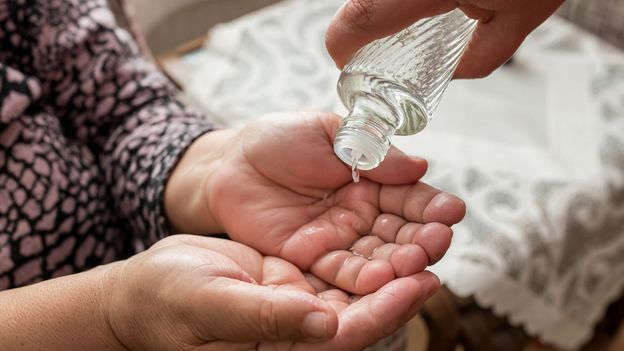 Kolonya has been a symbol of health and hospitality since the Ottoman Empire and is often sprinkled on guests' hands as they enter a home (Credit: yalcinsonat1/Getty Images)

According to Kerim Müderrisoğlu, CEO of Rebul Holding, which owns Atelier Rebul – one of the oldest and most famous commercial kolonya brands in Turkey – the production of kolonya is rather simple. First, pure ethanol is made from fermented barley, grapes, molasses or potatoes and is mixed with distilled water. Then, a natural fragrance such as magnolia, lemon or rosemary is added, and it’s left to sit for a three-week maturation period before being bottled.

As many of us apply kolonya alone while self-quarantining, it evokes a nostalgic sense of closeness and taking care of one another

As a deep-rooted custom of hospitality and symbol of good health, kolonya provides more than a practical disinfectant – it’s a source of comfort for many of my Turkish friends here at a time of uncertainty. In the year and a half I’ve lived in Istanbul, I’ve had my palms doused with it at countless restaurants, shops and homes. And now, even as many of us apply kolonya alone while self-quarantining, it evokes a nostalgic sense of closeness and taking care of one another.

Long before kolonya, there was rose water. Beginning in the 9th Century, cultures across the Arabian Peninsula used this rose petal-seeped fragrance for aromatic, culinary, beauty, religious and medicinal purposes, with the Persians, Egyptians and Ottomans also using it to cleanse themselves and welcome guests. By the 19th Century, eau de cologne (a naturally scented fragrance better known today as “cologne”) made its way along trade routes from Cologne, Germany, to the Ottoman Empire. When Ottoman Sultan Abdülhamit II first encountered it, he adapted it by blending the tradition of rose water with the novelty of foreign alcohol-based fragrances to create kolonya. 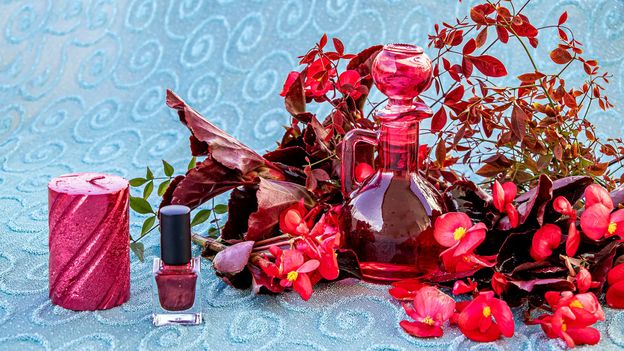 The tradition of kolonya derives from rose water and it is a mixture of ethanol, essential oils and natural fragrances (Credit: Sebahat Dogen/Getty Images)

Ingredient-wise, there’s not much difference between eau de cologne and Turkish kolonya. Both use roughly the same ethanol-to-essential-oil ratio and often incorporate citrus oils like orange and lemon. But what makes kolonya so unique is how it’s used, both culturally and practically.

By the early 20th Century, kolonya’s popularity was surging, thanks to pioneering chemists. In Istanbul, a young French chemist named Jean Cesar Reboul opened one of Turkey’s first pharmacies in 1895, and with his apprentice, Kemal Müderrisoğlu (Kerim’s grandfather), they created what remains one of Turkey’s most iconic kolonya distillers at Atelier Rebul. Today, Atelier Rebul still sells their signature Rebul Lavanda, which was originally made using lavender grown in Reboul’s garden, and Kerim estimates that their kolonya sales have increased eightfold since the pandemic began.

“It’s an antiseptic with the added benefit of a beauty fragrance,” Kerim explained.

Meanwhile on the Aegean coast in the city of Izmir, the Ottoman Empire’s youngest chemist, Süleyman Ferit Bey, journeyed to Grasse, France, in the 1920s to learn French perfume-making techniques, and returned to create another famed kolonya called the Golden Drop, which has become a symbol of Izmir. Around the same time, in Ankara, a businessman named Eyüp Sabri Tuncer concocted a kolonya using lemons from the coastal town of Çeşme, which has become one of the most recognisable kolonyas across Turkey today. His namesake brand is still one of the country’s leading producers. 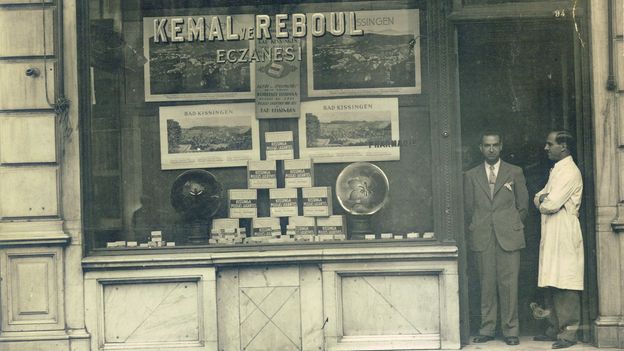 Atelier Rebul, one of the oldest and most famous kolonya brands in Turkey, first opened on the streets in Istanbul in 1895 (Credit: Atelier Rebul)

According to Elizabet Kurumlu, an Istanbul-based tour guide, smaller cities began adopting kolonya and altering it with their own unique ingredients and terroir: Isparta produced sweet rose-scented kolonya; communities near the Black Sea produced tobacco kolonya; and elsewhere kolonya was made with fig blossom, pistachio, jasmine and magnolia.

Similar to how many wineries are named after the owner’s family name, kolonya also took on an air of familial prestige, with the most high-end brands named after the founders. According to Kurumlu, a family’s kolonya brand became a source of pride and a status symbol. To reflect this, kolonya bottles were often custom designed in ornate shapes at a glass factory in Istanbul. Today, some decorative bottles have become collectables, with rare Ottoman-era bottles selling for as much as 5,000 Turkish lira (about £600) at auction. In Istanbul, a coveted collection of these bottles is on display through the Orlando Carlo Calumeno Collection and Archive at Galeri Birzamanlar.

By the mid-20th Century, kolonya was being produced on an industrial scale to make it accessible and affordable for the masses. Today it’s found in almost every Turkish home. 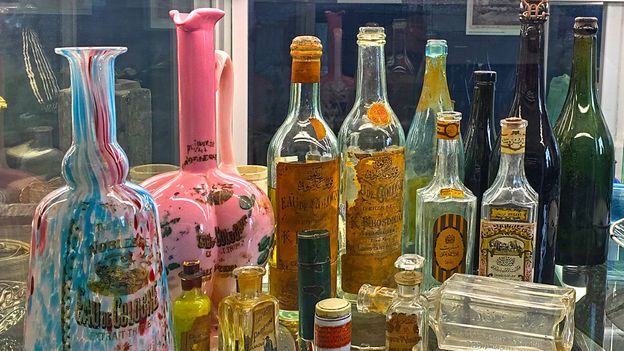 “Having kolonya in your home became as common as having food in the fridge. Usually people keep a bottle in the bedroom, bathroom and living room, so it’s never out of reach,” said Kurumlu. “It also became an essential tool to teach hospitality at an early age. When I was a child, it was my duty to greet the guest and make sure they had their three customary Turkish things: kolonya, candy and cigarettes.”

Kolonya has always been a staple of large gatherings, and it’s customary at religious holidays like Ramadan. “Typically [when] many people are coming together from all over the place, people use kolonya as a welcoming gift, but also as a way to keep everyone healthy,” said Dr Topaklı. “Tending to your guests’ health is a form of hospitality.”

Tourists in Turkey have likely encountered a bottle of kolonya at their hotel, in upscale restaurant bathrooms, or had it offered to them at the end of a long bus ride. 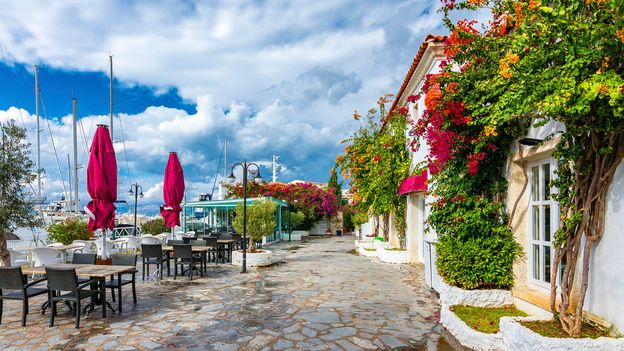 Different regions in Turkey make their kolonyas with local ingredients, and lemons from Çeşme are one of the most famous national scents (Credit: nejdetduzen/Getty Images)

In addition to its hygienic qualities, kolonya is also believed to have other health benefits. Sprinkling a few drops of it onto a sugar cube is said to aid digestion, and rubbing it onto your temples can relieve a headache. “Whenever we visit patients in the hospital, we would take them kolonya or a bag of oranges,” Kurumlu said.

You will hardly find kolonya outside of Turkey, but maybe now that will change soon

Even before the coronavirus, the kolonya industry was still growing. Traditionally, the fragrance has been sold at chemists, grocery stores and shops, but in the last decade, top Turkish brands began opening their own brick-and-mortar boutiques. Atelier Rebul opened their first one in 2013, and now has 22 shops across Turkey. They have also begun to expand internationally, distributing to Europe, the Middle East and partnering with a Japanese pharmaceutical company last year. According to Kerim, they are planning to open a new factory to meet the increased demand caused by Covid-19. 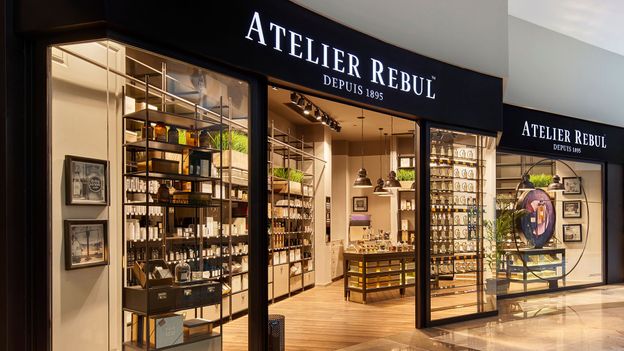 “You will hardly find kolonya outside of Turkey,” said Kerim. “But maybe now that will change soon.”

Beyond trendy boutiques, kolonya is still widely distributed throughout Turkey. But with the supply chain being squeezed during this time of high demand, some people are turning to a new way to ensure a stable personal inventory. Kurumlu explains that Kolonya’s base, ethanol, is also an ingredient for making traditional homemade cherry liqueur, so many families have a bottle on-hand.

“In the wake of the coronavirus, some people are using it to make their own kolonya instead of their usual cherry liquor,” she said. “Everyone is calling each other and asking, ‘Do you have enough kolonya at home?’” 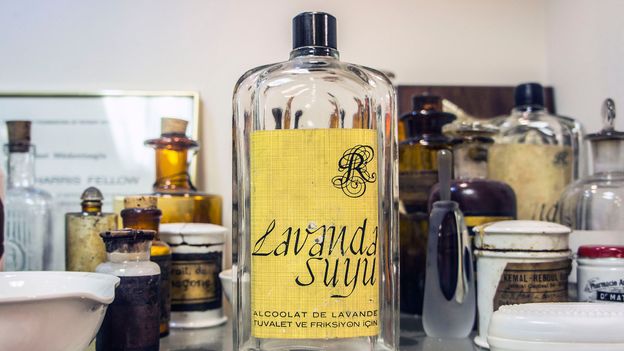 Like the nearly 16 million other people in Istanbul, my life is currently confined to my apartment. With a stay-at-home order in place and increased restrictions being rolled out almost daily in Turkey, I spend my days drifting through memories beyond these walls. It hits me that in this new reality, one of kolonya’s most potent qualities isn’t just the ability to disinfect, but to transport: with each scent, comes a vivid memory. The lavender kolonya takes me back to visiting Isparta’s lavender fields with close friends last summer. I think of late-night group dinners at smoke-filled meyhane taverns on the Bosphorus.

I might be a foreigner here, but kolonya quickly became part of my daily and social ritual. And now, each time I use it – which is many, many times a day – its ability to inspire a memory, an emotion or a daydream soothes my isolation-induced anxiety and reminds me that we’ll all be making new memories again soon.